Check out this World Reptile Day Q&A blog with Dr. Kristina Chyn, a postdoctoral researcher from Texas A&M University studying the anthropogenic effects on the ecological structure of wildlife in Taiwan and Australia!

As a Conservation Biologist, what led you to study the field of herpetology? How did you find out you were interested in it?

It took roughly 20-years for my interest in herpetology to bloom. I grew up in a city (Austin, Texas) with parents who were not interested in the natural environment, so I had very little exposure to the natural world when I was young. However, I had felt drawn to learn more about wildlife and the environment from an early age and often borrowed nature themed books from the library. Through grade school, I loved the sciences, especially classes dealing with animals and the environment, so I eventually enrolled in AP Biology and AP Environmental Science during my final years of high school. My enjoyment of those college-level natural sciences courses helped me decide on a college major in the natural sciences.

At my university, I had the opportunity to explore and gain experience in different types of natural science research. I cast a wide net and worked in several labs over four years, including performing lab work for a bee genetics study, helping curate specimens for the university insect collection, and conducting field work for a salamander ecology project. These varied experiences helped me to understand which aspects of biological study I was most interested in. Unsurprisingly, I was most enthusiastic about the salamander project. Not only did I enjoy field work and find salamanders to be fascinating creatures, but I was heavily motivated by the purpose of the research, which was finding conservation solutions for the populations of salamanders whose habitats were in natural gas fracking areas. That experience was pivotal to helping me narrow my general natural science interests to conservation biology and herpetology. 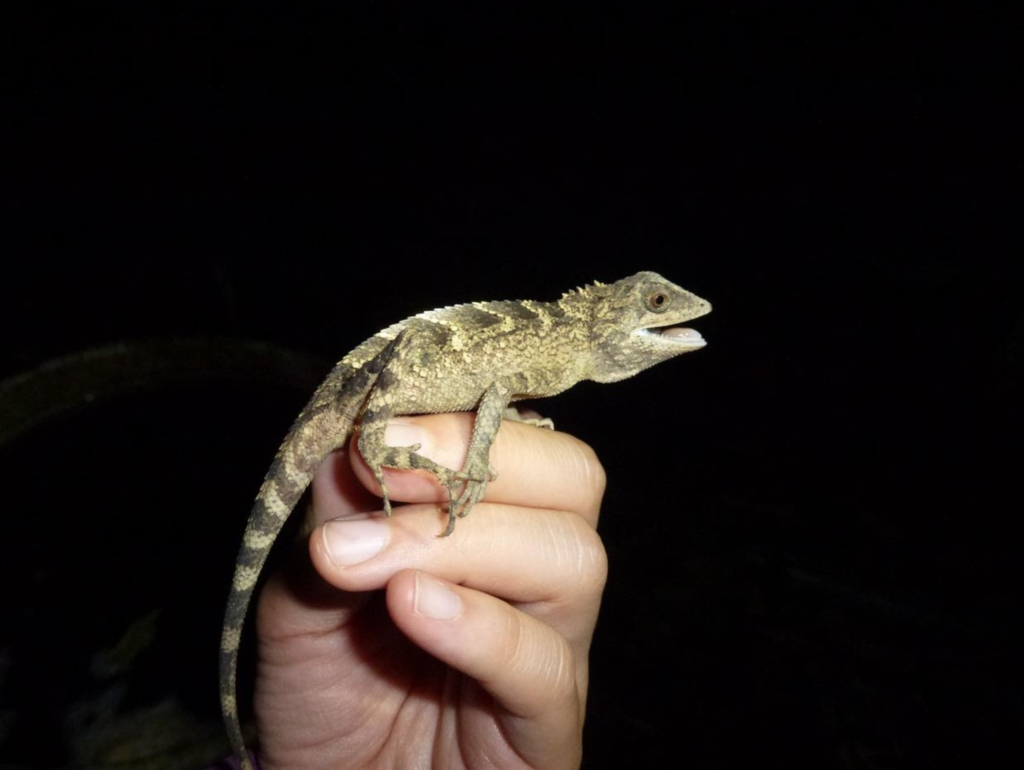 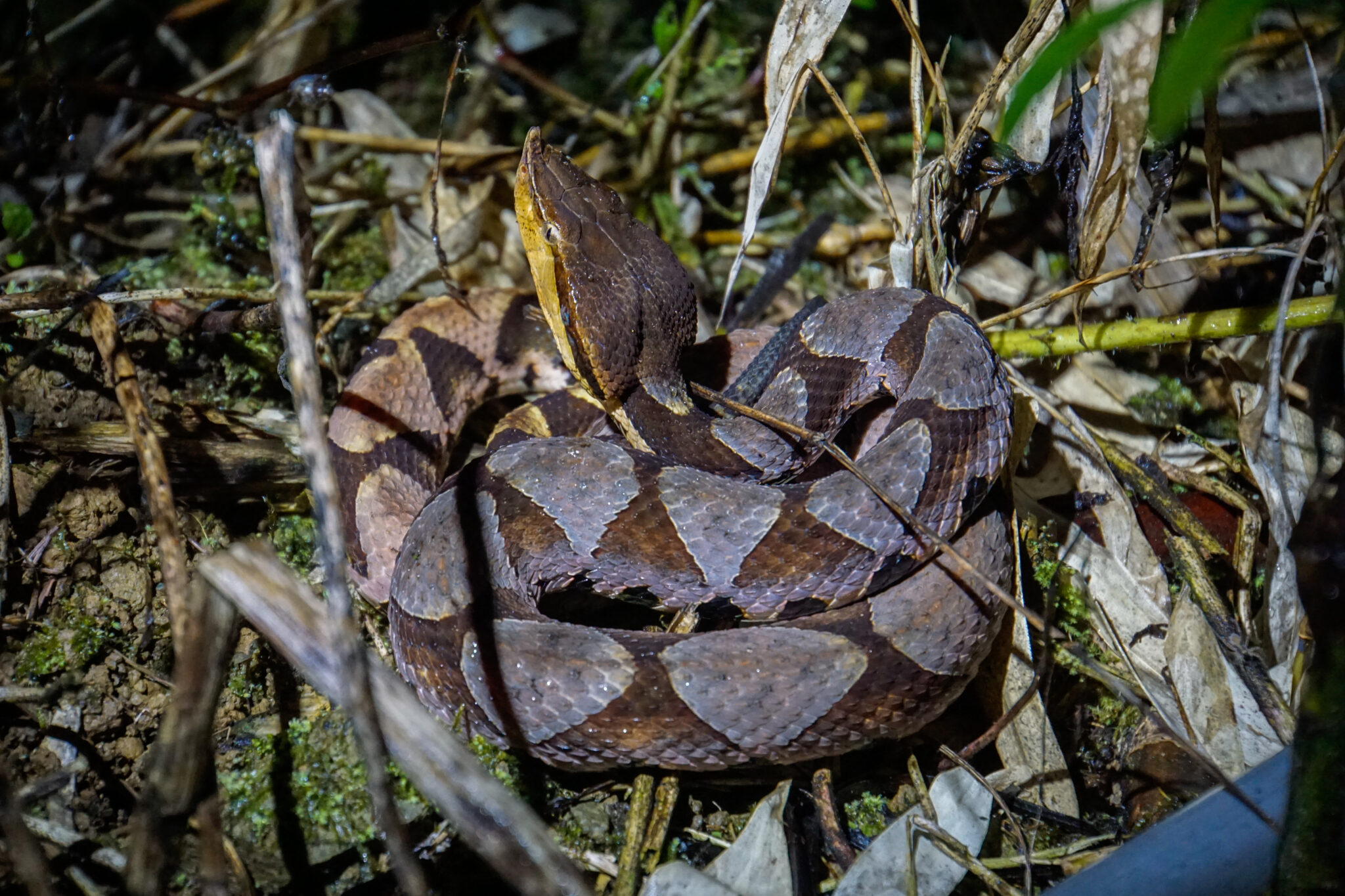 Left: Male Japalura swinhonis being held by the back thigh. Right: Deinagkistrodon acutus in situ

You are collaborating with researchers at the Taiwan Road Observation Network to create awareness about the roadkill risks for reptiles and amphibians. If action is not taken, what will be the biggest threat to these species?

As Taiwan is a small island (roughly 36,000 square kilometers) separated from continental Asia by a 180 km-wide strait, there are many endemic species that evolved there and exist only on that small patch of land. This makes these species highly adapted to the island and its ecosystems and unfortunately, also makes it very easy for them to go extinct. The largest threat to the endemic species of Taiwan is loss of habitat. Since there is so little habitat for them to begin with, any further development and habitat change/loss severely increases their risk to extinction.

Roads are one aspect of development that are highly impactful on endemic island species. This is not only because roads create habitat loss and fragmentation intrinsically, but also because they cause “contagious development,” where roads in new areas allow development of more roads and land conversion in new areas.

The Taiwan Roadkill Observation Network (TaiRON), a community science network, is helping document one of the most obvious effects of roads, roadkill. This data is crucial for helping monitor which species are directly affected by roads. The roadkill observations are also helpful in modeling potential and future effects of these roads on endemic species, which was one aspect of my PhD research. Additionally, the method of modeling the effect of roads on wildlife can be used for predicting the effects of potential new roads to help prevent highly impactful new roads from being developed.

You can follow this link to explore an interactive predictive roadkill risk map for common venomous snakes in Taiwan (https://rawcdn.githack.com/kmchyn/2019_TW_roadkill-risk/b6ba566b820213cc5c1d9ce6f3aa5cf0b5cbdc9b/cvs_filt.html).

Published research with TaiRON (email me for a pdf at kmc365@cornell.edu or on Research Gate: https://www.researchgate.net/profile/Kristina-Chyn): 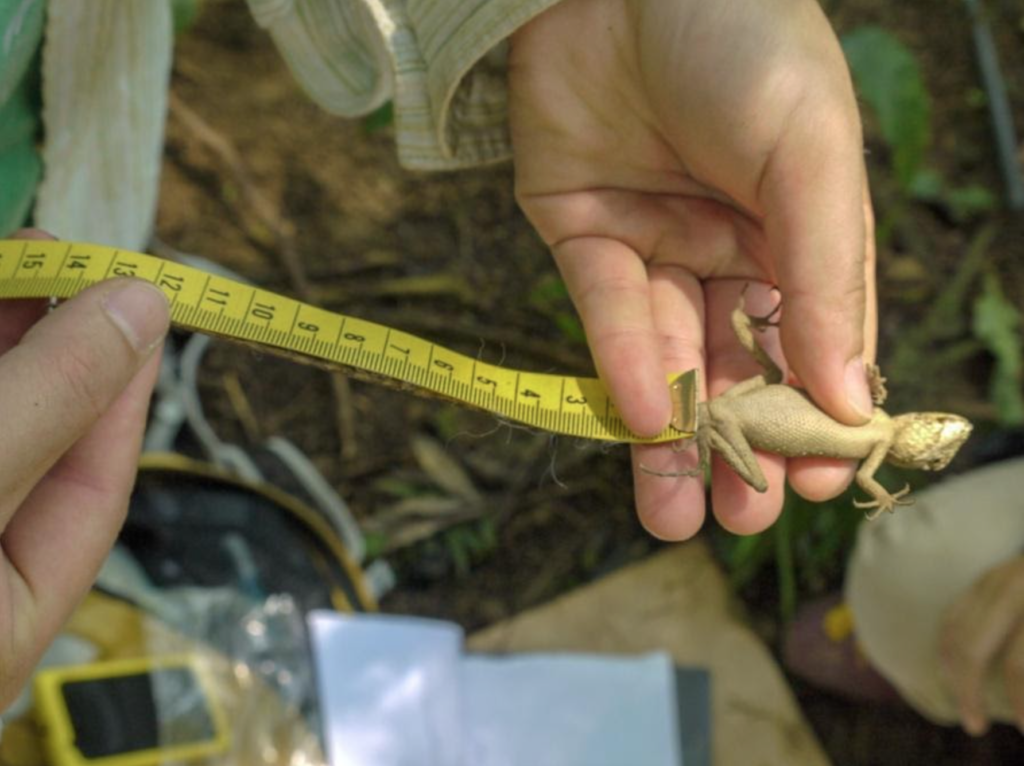 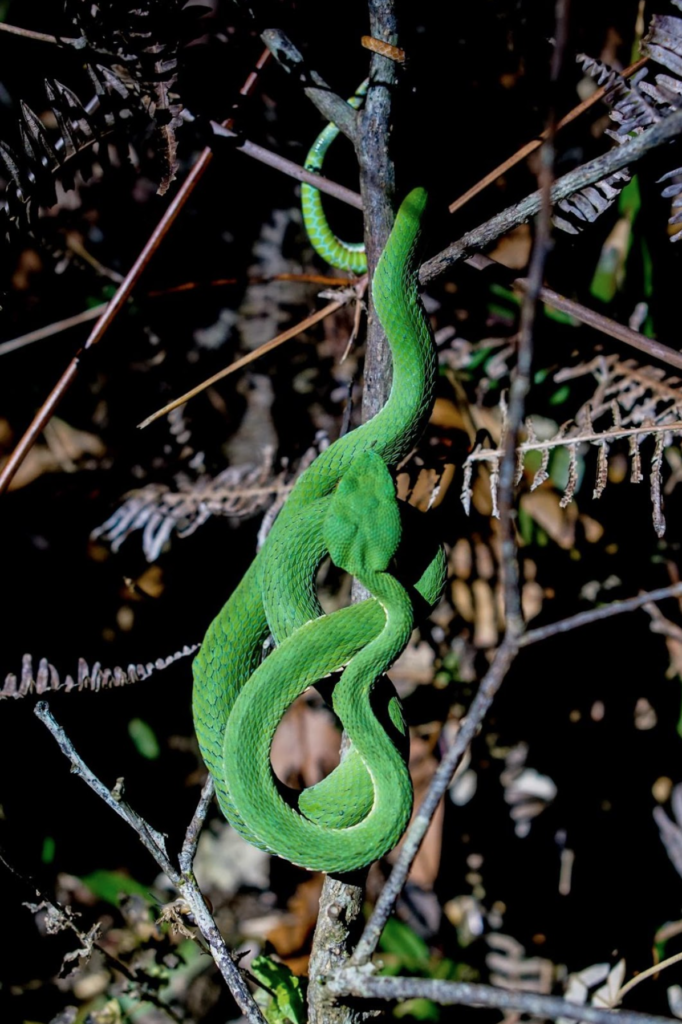 You conducted fieldwork for the Fulbright fellowship research project in Taiwan and explored different wildlife sampling methods in the day and night time. How does this exploration differ from others?

The fieldwork methods I used for my Fulbright project in Taiwan were based on tried and true methods in herpetological ecology. My team and I installed over 250 pit-fall traps, traps that are dug flush into the ground so that small wildlife fall into them. We checked these traps daily and took measurements, such as weight, SVL, and sex, of the animals that fell into them. Since many of Taiwan’s reptiles and amphibians are nocturnal, we also conducted visual encounter surveys at night to observe these nocturnal species.

Throughout your academic endeavours and career in herpetology and conservation biology, who did you look up to or view as a role model/mentor?

I found my first mentor in conservation and herpetology as an undergraduate at Cornell University. Kristi Sullivan introduced me to field ecology research and my love of herpetofauna. I had been hired as a research intern on a project studying the effects of natural gas pipeline clearings (areas above where natural gas pipelines are buried where trees and vegetation are cleared) on salamanders in Pennsylvania and New York forests. Prior to this research internship, I had little experience in field research outside of a course and short volunteer opportunities. Kristi taught me the basics of how to move through a forest with minimal disturbance, identification of the local flora and fauna, and how to systematically collect data and records. She instilled a land ethic and appreciation of field work in me, and also introduced me to my passion of herpetological conservation.

You are working with researchers at the University of Melbourne to apply roadkill risk modeling to Australian wildlife to broaden the impact of your research. How do you plan to apply your research and model globally?

The predictive roadkill risk modeling methodology (see interactive map link above as an example) my collaborators and I developed can be easily applied anywhere there is sufficient roadkill data. We have applied this methodology to predict roadkill risk for several important herpetofaunal groups in Taiwan and for the Tasmanian devil in Australia. It is important to collect roadkill data so that these methods can be applied globally. 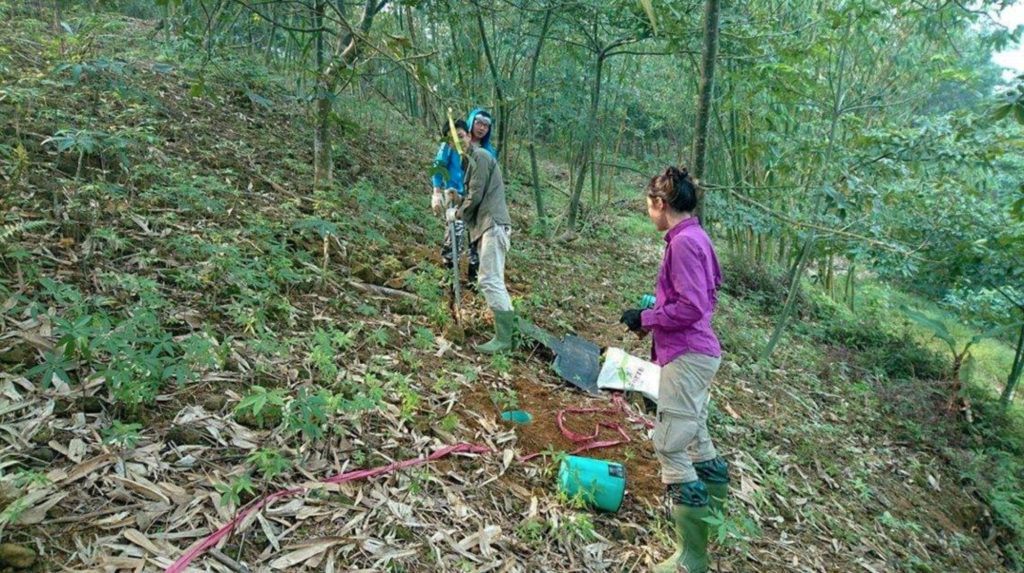 What challenges did you encounter throughout your years of research as a herpetologist?

Herpetology is still a very white male dominated field. That is not to say that white men have not contributed greatly to the field, but just that many other people (women, people of color, non-western people) have been excluded or their contributions overlooked. There are several intersectional challenges I have faced as an Asian American woman in herpetology, and there is little representation of women like me in this field. In western societies, Asian women are often stereotyped as meek and not “outdoorsy,” so we often get underestimated in our abilities in the field so we may not be hired or respected. This has previously led to feelings of imposter syndrome as a young woman of color in conservation biology and herpetology, or worse, harassment. However, as I have made it through the trials of a doctoral degree and gained more experience in these fields, I have found supportive colleagues and friends that I trust and learned to avoid those people who stereotype and/or harass women like me.

Lastly, what inspirational message would you give young women to inspire and encourage them to pursue a career in the field of STEM?

As there are still many barriers for women, especially women of color in STEM, it is important that you seek out good mentors who have pushed through those barriers. I would not have gained the experiences or had the opportunities I have had in herpetology and conservation without my very first mentor, Kristi Sullivan. It is important to find mentors who help advocate for you and help you grow in these male dominated fields. Though it has been challenging and I have faced many barriers and harassments that my male colleagues have not, it is very possible to pursue a fulfilling and impactful career in herpetology and STEM fields. Don’t be deterred by the current state of STEM fields; reach out to supportive mentors and explore and gain broad experience in different aspects of STEM! You will likely find something you are passionate about and someone who will help foster that passion.